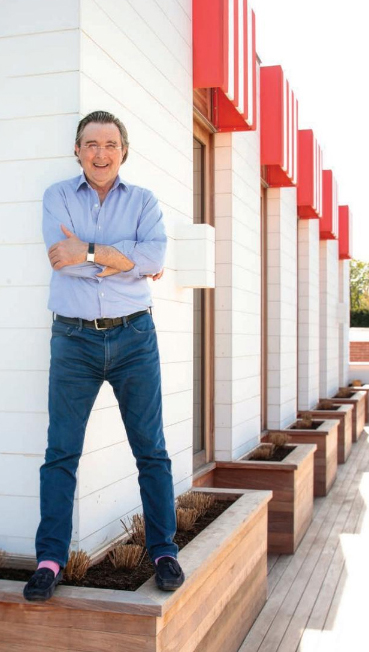 Architect Bill Sclight is one of Hampton’s premier architects. Through his firm, W.A. Sclight Architect, P.C., located in Water Mill on the East End of Long Island, Bill is known for designing projects for many discerning individuals in New York City, the Hamptons and internationally. The firm, founded in 2002, is staffed with highly experienced architects, including chief Project Architect Gary Sanders. W.A. Sclight Architect P.C. possesses a well-earned reputation for exact attention to detail, informed by a keen awareness of light, scale, texture, and proportion. The firm’s portfolio includes residential and commercial/ retail projects with influences drawn from Contemporary, as well as, Transitional and Traditional architecture.

Bill Sclight received his Bachelor of Arts in Journalism from Rutgers University with honors. After receiving his Masters Degree in architecture from Pratt Institute, Bill moved to The Hamptons in 1985 to begin his career in architecture. In the spring of 2002, he incorporated his own firm, W. A. Sclight Architect, P.C. in Water Mill, NY. Since then, the firm has designed and completed hundreds of projects in The Hamptons, the North Fork, New York City, Florida, North Carolina and Europe. Guided by the philosophy that service to the client is paramount, the firm’s work is informed by an acute attention to detail, expressed through the style idioms of Traditional, Transitional and Contemporary architecture.

Bill has received numerous national design awards and has been featured in the following publications:

And what’s a modern house without a flat roof? For Tim Davis’s oceanfront listing at 1400 Meadow Lane, it made sense to show prospective owners what could be done by creating a modern house set on the footprint of the existing home to fully realize the property’s ocean, dune and bay views. Local architect, William (Bill) Sclight, worked with the current zoning restrictions to create a design, which will be able to be implemented by new owners. “Rooftop terraces and even gardens have become one of the newest modern features given the flat roof design which lends to all kinds of creative use,” says Davis. “You also have an ability to have more open (less formal) interior living spaces.